When Jughead’s old pal Hot Dog is hit by a car, the distraught teen takes him to Sabrina and her family to bring him back to life. While her aunts refuse, Sabrina is moved by Jughead’s plight and taps into some dark magic to bring Hot Dog back to the land of the living.

Apparently all the copies of Pet Semetary were checked out before Jughead decided to this. Because while Hot Dog does come back, sometimes dead is better. Before you know it, Hog Dog has unleashed a wave of zombie terror in Riverdale — and wouldn’t you know it, on the night of the big dance!

Afterlife with Archie is a hybrid of the squeaky clean stories of Archie, Jughead and company and the gritty, over the top horror of The Walking Dead. Reading that sentence, you might think these are two things that won’t go well together. But instead of being jarring, the two pieces fit well together, giving us a band of survivors that we know and can root for all while watching their world go to hell in a hand basket as several familiar faces become zombies and begin attacking.

And yet for all the humans who did in this collection (and there are a few), it’s interesting that the death that readers may feel the most is Archie’s beloved old dog pal. Heading home to check on his parents, Archie comes across the zombie Hot Dog and looks doomed, only to see his old pal step in to save his life one last time. The use of thought balloons to narrate Archie’s pal’s internal monologue and thoughts about saving his beloved master are moving at first, turning tragic as the zombie virus consumes him and he turns on Archie.

I won’t lie and say I wasn’t more than a bit moved by this moment and the emotions that this comic taps into. I also won’t lie and say I caught every nuance of the storyline because I’m not necessarily familiar with every character and cliche from the world of Archie comics on display here.

But none of that matters because this collection of five issues works well as a homage to both the tropes of Archie and horror stories. 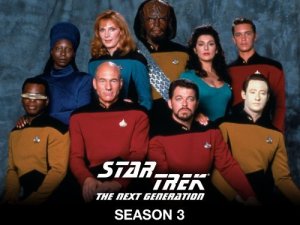 The last two installments of All Good Things: A Star Trek podcast have celebrated the twenty-fifth anniversary of Star Trek: The Next Generation‘s third season.

This is the season when Next Generation came into its own and helped the franchise soar to new heights.  It also has the greatest cliffhanger in television history capping off the season. (“Mr. Worf..fire!”)

To discuss this season it took Barry and I two episodes.  We discuss each episode and give you our top three episodes from the season.   We did put “Yesterday’s Enterprise” and “Best of Both Worlds, Part One” into the Hall of Fame and took them off the table because, quite frankly, we’d rank them one and two and then have to do lots of honorable mentions.

So tune in to Episode 53 and Episode 54
and find out why we love this season so much.
http://www.podbean.com/media/player/q8gi5-598d52

Filed under All Good Things podcast

Tagged as All Good Things podcast

As we get ready for Trick or Treating Saturday night, I am taking this week to look at a variety of spooky things.  So I figured for today’s Way Back Wednesdays (hosted by A Well Read Woman), I’d look back on something from pop culture that chilled me in my younger days and left an impression on me.

I’m a big fan of old time radio, especially the old time comedies. I was introduced to old time radio by the Star Wars radio dramas.  They used to air on my local NPR station Sunday evenings and that would lead into a show called the Big Broadcast.  The Big Broadcast was a couple of hours of vintage radio shows that aired each Sunday night.  Among those in the regular rotation were The Great Gildersleeve and Suspense.

Which brings us to the episode of Suspense for today, “Dead Earnest.”

The set-up is fairly straight-forward.  A guy named Earnest is a catalpetic.  This means that he can appear to be dead even if he’s not.  Earnest has a medical bracelet detailing his condition and carries a note in his pocket.   But when he’s almost hit by a car and suffers an attack, he’s separated from both.    What follows is an edge-of-your-seat story as various people find the note and other pieces of Earnest’s wardrobe and we wonder if Earnest will be actually killed when the people at the morgue go to embalm him.

This episode really got under my skin when I first heard it and listening to it years later, it’s still a good study in how to build tension and suspense.

Suspense broadcast the story several times with a variety of casts during its run.

Filed under meme, Way Back Wednesdays

Tagged as meme, Way Back Wednesday

Time again for Top Ten Tuesday (hosted by the Broke and the Bookish).  This week it’s a Halloween-themed freebie.  So, I thought I’d look at the top ten memorable stories by the master of horror, Stephen King.

Kicking off the week with Musing Mondays (hosted by A Daily Rhythm).

This week’s random question asks: Do you read any horror, or something scary, in honor of Halloween? Why, or why not?

A couple of weeks ago, I talked about an audio version of Edgar Allen Poe’s The Telltale Heart that I dubbed onto cassette from my local library that I listened to a lot when I was much younger.  It was narrated by Vincent Price, who had the perfect voice for the story and I really enjoyed it.  I used to listen to that a good deal during the lead-up to Halloween.

These days, I read a lot of scary and horror stories all the year round (big Stephen King fan), so I don’t necessarily go out of my way to read them as we lead up to Halloween. But this year, I’ve read a couple of things that have a supernatural element as we get ready for costumes and candy.

Part of this was my TBR pile is scary big and needs to be whittled down a bit.  And part of it was that I wanted to read something with a scary element for Halloween.

Audiobook Review: Doctor Who and the Ark in Space by Ian Marter

Whenever I’m asked by new Who fans for a good starting point to watch classic Doctor Who, I don’t point to “An Unearthly Child” but instead to Robert Holmes’ classic fourth Doctor serial, “The Ark In Space.”

Not only does the story kick off a great run of stories, but it comes from an era this is (arguably) the most consistent and best in the entire fifty plus year run of the show — classic or otherwise.

The story includes a minor call back or two to the previous installment, but for the most part it’s a self-contained horror story set in the near future. Promising Harry a quick trip to the moon to prove the TARDIS is what the Doctor says it is, our trio instead ends up in the far future thanks to Harry’s twisting the helmic regulator a bit too much. The Doctor, Sarah and Harry arrive on a future space station that is home to the final remnants of humanity in suspended animation waiting their chance to awaken and begin the conquering the Earth again. But something has gone wrong and humanity has overslept.

What’s gone wrong is the Wirrin, an insect race that can survive in deep space and has journeyed to the ark seeking our humanity. The Wirrin are also driven to survive and are looking for a new home — and the ark and the Earth look like just the right place to get started. END_OF_DOCUMENT_TOKEN_TO_BE_REPLACED

This week’s Top Ten Tuesday (hosted by the Broke and the Bookish) asks us to ponder which authors we’d like to see collaborate on a book.   Here’s my list.

Review: The Girl With the Deep Blue Eyes

Murder was easy. The tricky part was getting away with it.

Doak Miller is a retired NYPD cop spending his golden years in sunny Florida. He keeps himself in the game a bit by occasionally doing favors for the local sheriff’s office.

His latest assignment is wearing a wire to incriminate a woman who wants to do away with her husband. But it just so happens that that woman in question is the girl of Doak’s dreams and not only does he help her to not incriminate herself, but he begins a relationship with her that leads to his working out just if and how the husband should be killed.

The latest entry in the Hard Case Crime series, Lawrence Block’s The Girl With the Deep Blue Eyes is everything that a reader has come to expect. A sexy cover, a hard-boiled protagonist and a fem fatale. The fact that Doak is carrying on affairs with not only the title character but two other women only helps to underscore his role as the noir lead.

Told in quick chapters, Girl is not for the faint of heart. This novel is an homage to pulp fiction at its best — lurid, quick to read and full of all kinds of graphic details that aren’t normally discussed in polite company. If you’re squeamish about adults acting like adults (for good and bad), then this book probably isn’t for you.

At multiple points in the story, Doak takes in a few classic noir films that have people trying to get away with murder and always getting caught. These sequences seem to be Block calling upon a shared vocabulary for this type of story and it helps us see how he’s trying to not only pay homage to it but give it a bit of a new twist in this story.

Not for the faint of heart, The Girl With the Deep Blue Eyes is gritty, raw and compelling.

I’ve not read a lot of Block’s previous works but after reading this one, I’m intrigued to look at his extensive back catalog and see what other gems are there.

The Flash: The Man Who Saved Central City 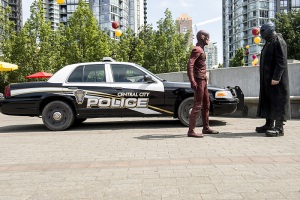 Picking up six months after the season finale ended last year, “The Man Who Saved Central City” gets the second season of The Flash off to a solid start.

The episode had to do a bit of heavy lifting by not only resolving last year’s massive cliffhanger but also putting the pieces into play for season two.   It’s interesting to note that the show doesn’t pick up right away and tell us how Barry stopped the vortex over Central City last year.  Instead, we see flashbacks to it while getting a look at where everyone is now — both physically and emotionally. END_OF_DOCUMENT_TOKEN_TO_BE_REPLACED

Top Ten Tuesday: Problems Only a Bibliophile Could Have

This week’s Top Ten Tuesday (hosted by the Broke and the Bookish) asks an intriguing question.  What are the Top Ten Bookish Things You Wish You Could Quit (Or Have Quit).

As usual, my responses will be varied.