A good friend always used to comment that she looked forward to the latest Lynley and Havers novel not just because it would have a good mystery, but because she enjoyed her annual check in with Lynley, Havers, Deborah, Helen and Simon.

On a certain level, I have to admit I agreed with her.

Based on that, I should have loved the latest installment in the series from George a lot more than I did. After a couple of books focusing on Lynley in the aftermath of Helen’s death, it’s nice to see George getting back to including some of her other characters in the story. That doesn’t mean that Lynley still isn’t haunted a bit by what’s happened to Helen and is still grieving (although his engaging in a strictly sexual relationship with his boss at Scotland Yard seems exactly like the kind of rebound relationship both parties would pursue), but this is a novel about Lynley coming out of his mourning and trying to get about the business of living again.

It helps that he’s been given a special assignment by Hillier. When the nephew of a family friend of Hillier slips and drowns, Hillier sends Lynley to a small village to make sure that no stone has gone unturned in investigation.

If you’re looking for a murder mystery, you won’t find one here. George takes a break from his typical “whodunnit” mystery with a story in which Lynley is brought in as a catalyst for a family who makes a regular habit of lying to each other. As the story unfolds, the lies told by various characters in their day to day interaction–not only to each other but also themselves–come to light, all with intriguing and, at times, unintended consequences. But the shining a light into the darkness isn’t limited to the cast created for this novel–the light also is shone on the regular characters as well.
END_OF_DOCUMENT_TOKEN_TO_BE_REPLACED 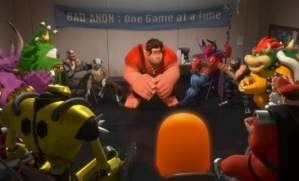 For thirty years, Ralph has been the adversary in the classic hit video-game Fix It Felix.  Lonely and in search of a friend, Ralph is told by his fellow game inhabitants and several other classic video game villains that he’ll never be more than the bad guy.  Determined to me more than his programming, Ralph leaves the game in search of a gold medal that he believes will win him the friendship and respect of his fellow game inhabitants.

By going “turbo” (invading other games in the arcade), Ralph achieves his goal of getting a medal in one game, only to lose it in the brightly colored racing game, Sugar Rush to “glitch” Venellope.   Ralph and Venellope hatch a plan to help her win the race and get his medal back.

With Wreck It Ralph, Disney is attempting to do for video games what Toy Story did for toys.    And, for the most part, it succeeds though the film probably won’t be as well-regarded by adults as the Toy Story trilogy is.