High-profile lawyer and single-mother Kate Barron is devastated when her fifteen-year-old daughter Amelia jumps to her death off the roof of a private high school. Accused of plagiarizing a paper on her favorite author Virginia Woolfe and leaving behind the word “sorry” scrawled on the building, Amelia’s death looks like an open and closed case of suicide.

Kimberly McCreight’s Reconstructing Amelia moves back and forth in time between chapters focusing on the past and Amelia’s point of view and the present, told in third person and focusing on Kate’s investigation. Sprinkled in are a blog that comments on the social order at the school, text conversations between Amelia and her various friends and journal entries from Kate’s early days as a single mother. McCreight presents clues as to what happened to Amelia and why over the course of each point of view, allowing the reader to surmise and see patterns long before certain characters do.

All of this placing of the various pieces of evidence works well to help keep the pages turning during the initial stages of the novel. It also helps gives the reader a different vantage on all the players involved in the story and how each one had an impact on Amelia’s life and death.

Most of it works for the first three-quarters of the novel. However, once the revelations about how and why Amelia died start coming to light, the novel loses a bit of its momentum. One storyline in particular about Amelia’s romantic life seems to be left open and isn’t satisfyingly resolved when the final pages are closed. Given that most of the other questions in the novel are answered, this lack of a full answer stands out a bit like a sore thumb. (It could be that the question is answered and I just missed it due to the sheer number of things happening in the final pages).

I hadn’t heard any of the comparison to Gone Girl before I picked up this book and looking back, I’m glad I had not. It seems like a lot of books these days want to be “the next Gone Girl” and while Deconstructing Amelia does offer readers multiple perspectives from various narrators, that’s really where the comparisons end. Amelia doesn’t rely on an unreliable narrator for its twists and turns. Instead, it relies on a character-driven mystery that unfolds across the various viewpoints and time frames to give the reader the real reason as to what happened to Amelia.

It’s a fascinating first published novel by McCreight. I’m certainly intrigued enough by her first novel to add her to my list of writers to watch.

The Randomizer is a collection of my thoughts on random pop culture things. I’m including a tease my first entry, centering on one of my favorite series here.

Ask people for a list of their favorite sit-coms of all time and you’re likely to get responses like Seinfeld, The Andy Griffith Show, Cheers or the Mary Tyler Moore Show.  Rarely in that list will you get the response Happy Days, which was a huge hit for a long period of time in the late 70s and early 80s.

Of course, it’s easy to understand why people can look down their nose at Happy Days.  It is the show, after all, that gave us the phrase “jump the shark” referring to that exact moment in a TV show’s history when the slow, inevitable decline began.   I think adding that phrase to the pop culture vocabulary has worked against the show and the general public’s memories of it over the years.

A recent article in the Onion A.V. Club that asserts that Happy Days sold its soul to be a hit didn’t exactly help either.

And while the article has some interesting points about how Happy Days evolved from a single camera series to a multi-camera formula driven situation comedy, I feel that I should come out and make the radical statement that while I like the first two season of Happy Days, most of the time when I stumble across the show in syndicated repeats, I feel like these are the two seasons I have to plow through in order to get to “the good stuff.”

And by “the good stuff,” I mean the third and fourth seasons when the show’s emphasis moved away from a nostalgic piece of Americana to putting one Arthur “The Fonz” Fonzereilli front and center of  the show.   These are the only two season of the show I own on DVD and it’s likely those will be the only two I will ever own though that’s less about my opinion on later seasons’ quality and more based on the belief that future seasons won’t see the light of day on DVD due to the musical rights.

It’s because of this that when the Hallmark Channel began running the entire series through in large blocks, I sought out and recorded selected episodes not included in the two seasons I have on DVD.

Read the full article on The Randomizer.

It’s been four years since J.J. Abrams revitalized the Star Trek movie franchise and with each passing summer, expectations for the next voyage “where no man has gone before” have ratcheted up higher and higher.  Add to it the extreme secrecy surrounding certain plot elements and character identities and you’ve got a movie that I entered with pretty much the same feeling as I did the first revitalized Trek a few years ago — equal parts anticipation and apprehension.

Huge parts of me were hoping that Star Trek into Darkness would be to the Trek franchise what The Dark Knight was to the revitalized Batman franchise.

Lofty expectations like that are probably unfair.  But I’ll also say that Christopher Nolan didn’t make us wait four years for the next installment either.

END_OF_DOCUMENT_TOKEN_TO_BE_REPLACED

With what seems like hundreds of Star Trek tie-in novels published over the last forty-plus years, I understand that finding new, unexplored areas of the “final frontier” can be a bit difficult. I also understand there are only so many ways you can tie together elements from the original seventy-nine episode run and have it still feel fresh.

Much of Devil’s Bargain has the feeling of “been there, done that,” to it for the crew of the starship Enterprise. In many ways, it feels like a third-season episode of the classic series and if you’ve watched the show, you know that isn’t exactly a compliment.

The frontier world of Vesbius is facing destruction because a huge asteroid is bearing down on the planet. The population withdrew from the Federation years ago, but that doesn’t mean the Federation is willing to let them all die in the coming catastrophe. They send Captain Kirk and company to try and evacuate the colony, but the colonists refuse to leave the planet. We eventually discover why they can’t and won’t leave as well as finding out that the population is a bit xenophobic. Ironically, it’s Spock who comes up with a potential solution — warp over to Janus VI and pick up a batch of Horta to mine the asteroid and break it up into chunks that will be more manageable for the Enterprise to take out or that won’t cause as much damage upon impact to the planet.

Along the way, Kirk falls in love with the daughter of the planetary leader and spends a lot of time pondering this. There are entire passages in which one or the other reflect on their relationship and how its only going to be a limited thing, but by golly, they sure are in love. I can see what Tony Daniel was trying to achieve here, but the execution is a bit lacking.

Daniel’s first Trek novel has some potential, but it never really all comes together.

Each time I pick up a new Trek novel, my memory is cast back to my teenage years when I couldn’t get enough of the Pocket novels. I’m beginning to believe my memories of most of those books are better than the actual novels themselves. Or else my tastes have changed (in large part because of the output of one Peter David) and I don’t find the standard, cliche ridden Trek novel quite as satisfying as I once did. Either way, I have to admit this one didn’t so much disappoint as it’s guilty of not living up to my memories and expectations.

Review: Me, Him, Them and It by Caela Carter

Once upon a time, Evelyn was a “good” girl, but when her family fell apart around her, she began to rebel against her good girl image. This included quitting most of her extra-curricular activities, dressing in a provocative fashion and secretly dating and sleeping with Todd. Her distant parents (she calls him The Stranger because he cheated on her mother and left for a while and her mother has thrown herself into work) are so disconnected that don’t realize that Todd is sneaking over most nights for a little extra-curricular activity with Evelyn right under their noses.

The only thing that matters to Evelyn is maintaining her GPA and escaping from Jacksonville to a better life in college.

And then things go from bad to worse when Evelyn discovers she’s pregnant and she can’t bring herself to tell Todd, much less her parents. Evelyn struggles with the decisions she must now face and worries about losing her one last friend and the implications of her decisions on what she will do about the baby. It doesn’t help that Todd abandons her, saying he can’t bring shame on his family by telling them about Evelyn or her condition. END_OF_DOCUMENT_TOKEN_TO_BE_REPLACED 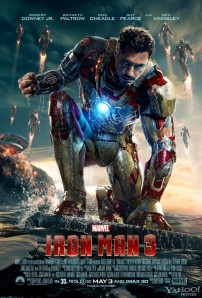 Anyone worried about a post-Avengers letdown can breathe a little easier – at least as far as Iron Man 3 is concerned.  The beginning of Marvel’s phase two of its movie empire begins on a high note with the best-in-the-series entry, Iron Man 3.

Set after the events of The Avengers, Iron Man 3 finds Tony Stark have a difficult time emotionally dealing with the events of last year’s huge hit.   Unable to sleep and obsessed with building an entire fleet of upgraded armors, Tony has isolated himself from the world and his friends.  What brings him back to the world is an attack  by the ruthless terrorist called the Mandarin on United States soil.  The blast puts Happy in the hospital in critical condition.  In a heated moment, Tony calls out the Mandarin on live television, swearing revenge and justice on the terrorist.

It’s one of multiple gripping moments during the course of Iron Man 3’s two hour plus running time.   And it’s one that is superbly played by actor Robert Downey, Jr., once again confirming what most of us have known since the original Iron Man installment – he’s the perfect actor to play Tony Stark and Iron Man.   Of course, it helps that Downey has a strong supporting cast who are all given a moment to shine in the sequel.