After fourteen books as a supporting character to Miles, Ivan finally gets his own entry in Lois McMaster Bujold’s long-running space-opera Verkosigan saga.

While Ivan’s life has never been quite as dramatic as his cousin, that all quickly changes when he agrees to do a favor for his old friend, By. All he had to do is protect a beautiful woman and her half sister from various enemies that would do them harm. But before he can turn around twice, Ivan is protecting two political fugitives via a hasty marriage of convenience and dealing not only with the political fallout from that but also the personal fallout from him mother and various friends back home.

Captain Vorpatril’s Alliance is a blend of space opera and romantic comedy that reminded me a bit of one of my favorite entries in this long running series A Civil Campaign. Ivan and Ted meet, get married and then proceed to get to know each other and fall in love. The Ivan/Tej storyline feels like it comes from the pages of your standard bodice-ripper romance novel, though thankfully Bujold allows readers to use their imagination to fill in certain aspects. (Translation: there are no long, drawn out, over the top love scenes here involving unique descriptions of parts of the anatomy. Though I’m fairly certain that fan-fic writers are hard at work even as we speak to fill in those gaps).

Thankfully, there’s enough politics and space opera thrown in so that novel doesn’t veer too far off field and into the romantic comedy arena too much. It’s nice to see Ivan get a chance to step out of the shadow of his cousin and after spending 400 plus pages with him here, I wouldn’t protest if Bujold decided to give us more another entry with Ivan front and center.

While I’ve been aware of Lee Child’s best-selling Jack Reacher novels for a while, I hadn’t really cracked the cover of one until I heard there was a movie based on the series headed our way. Being the guy who has to read the book first, I headed out to the local library and picked up the first novel, Killing Floor, assuming that the movie series would start with the first novel in the series.

That’s what I get for assuming. Turns out that Reacher, like the Bond movies, has decided not to start with the first published novel in the series, but with the ninth novel One Shot. After reading both One Shot and The Killing Floor, I think this is a pretty good idea. As an introductory novel, The Killing Floor is OK, but it’s not great. Having just been released from the Army after 13 years of service, Jack Reacher is wandering the country by bus. On a whim, he decides to visit a small town in Georgia to look in on his younger brother and soon finds himself embroiled in a conspiracy.

The first novel is a good one, but a lot of it depends on coincidence. Reacher happens to wander into vital information and situations at just the right time. This works the first time or two it happens, but I found myself rolling my eyes a bit as it kept occurring through the entire run of the novel.

And so it was that after reading the first Reacher, I jumped forward to the ninth novel, One Shot so I could do the inevitable comparing the book to the movie when I see it. As an action thriller novel, One Shot works extremely well. When a sniper goes on a killing spree, the prime suspect has only one request–find Jack Reacher. Turns out our accused sniper was trained by the military for this exact purpose and had a run in with Reacher as an MP. Reacher arrives on the scene and starts investigating, once again finding there’s more here than meets the eye. There’s too much evidence pointing to our main suspect, which Reacher finds suspicious. There’s also a conspiracy in play and Reacher kicking a lot of tail on various people who make the mistake of crossing him.

END_OF_DOCUMENT_TOKEN_TO_BE_REPLACED 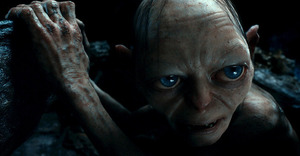 Watching The Hobbit: An Unexpected Journey, I can’t help but think that participant is finally getting her wish.  Covering the first six chapters of the original novel, An Unexpected Journey does exactly what many of us feared would happen with the original Lord of the Rings trilogy–be so slavishly devoted to the material we’d get every single moment from the novel realized on screen.

It makes for a visually rich, textured film.  However, it doesn’t make for a very interesting one.  An Unexpected Journey wavers between some compelling, absorbing scenes and a bunch of scenes that, quite frankly, would have been better suited for an extended cut director’s version on DVD or Blu-Ray.  The best moments in the film come in the beginning as we set up the storyline and director Peter Jackson teases us with glimpses of the dragon Smaug and when Bilbo (a nicely chosen Martin Freeman) plays the game of riddles with Gollem (Andy Serkis, superb as always in a role that should get him an Oscar nod, but alas it won’t).

In between those, it feels like we’re along on a journey and have to see every footstep played out on screen, with every leaf on every tree digitally rendered and calling attention to itself.

Watching the first installment, I can’t help but wonder if this is a case of stretching the material so far that it’s going to snap under the strain once we see the entire trilogy finally released.

I’m sure Tolkien will disagree and I’ll confess that while I like Tolkien, I respect his contribution to fantasy more than I like it (at least on the printed page).  As a fan of the original trilogy and how well it trimmed the fat, making for a lean, understandable and enjoyable adaptation of the beloved fantasy trilogy, I have to admit I was a bit disappointed by An Unexpected Journey.   I am hopeful that this is just the exposition leg of the trilogy and the next two installments will get back to what made Jackson’s original trilogy of films so magical.

The Hobbit: An Unexpected Journey has its moments, but overall it’s not quite as magical as it could or should have been.

Review: The Racketeer by John Grisham

At this point, it’d be easy for John Grisham to go on cruise control, churning out a new legal thriller a year. Anything penned by Grisham at this point is going to be a guaranteed best seller, but it’s nice to see that Grisham is still challenging himself and his readers on occasion with books that defy the conventional legal thriller mold.

The first half of Grisham’s latest offering The Racketeer feels like Grisham pushing himself into different territory than his standard The Firm model of storytelling. White collar criminal Malcolm Bannister is serving a ten year sentence in prison for a crime he didn’t knowingly commit. A small-town lawyer, Bannister was unwittingly part of a scheme to launder money and paid the price when the federal authorities decided to shut down the operation. Stripped of his law license, Bannister loses both his freedom and his family (his wife divorces him while on the inside). But while in a minimum security prison, Bannister (where he serves as librarian) hears about the murder of a federal judge and realizes he has information that could help solve the crime and get him released.

END_OF_DOCUMENT_TOKEN_TO_BE_REPLACED

Time and Space Journeys — Doctor Who: An Unearthly Child

Last week, my favorite television series of all time celebrated its 49th birthday.   To celebrate, I popped in the DVD release of the first episode of Doctor Who that ever aired back on November 23, 1963.   But instead of stopping with the original episode, I found myself in the mood to sit down and watch not only the entire four-part serial that kicked off 49 years of travels through time and space, but also in the mood to re-visit the classic series and the era of the first Doctor again.  So, from time to time as we count down to the 50th anniversary of the greatest show ever made, I’m going to look back on Doctor Who and post some thoughts on the stories I take in.  They may all be from one era or I may skip around.  All I know is I’m looking forward to re-discovering this classic television series as the celebration of 50 years kicks into high gear.

Whenever I watch or re-watch the first episode of Doctor Who, I try to cast my mind back and wonder what it must have been like to tune in to that very first episode on the twenty-third of November back in 1963.   I often wonder if I would have been hooked right away or if I might have dropped in and out on the first few installments before embracing the show as much of the British public did a few weeks later when a certain pepper-pot shaped monster arrived on the scene.

Watching “An Unearthly Child,” I think I would have been hooked right away — though the three episodes that follow the first episode might have tried my patience.