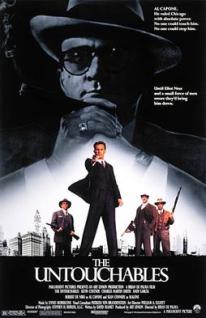 During his acceptance speech for the Oscar for best supporting actor in The Untouchables, Sean Connery famously quipped, “My name is Connery, Sean Connery.” Connery defined the role as British secret agent 007, just as the role would come to define Connery for much of his career. There is even some debate over whether or not Connery really “deserved” the Oscar for his role in The Untouchables or whether the Academy was giving him a “lifetime achievement award” (see also John Wayne, Denzel Washington, Al Pacino).

Rewatching The Untouchables, Connery seems such a natural playing the mentor to Kevin Costner’s Elliott Ness, that it’s easy to see why some would think Connery’s award more for his body of work than what he does here. But Connery really sinks his teeth into Malone, giving us a great performance that stands on its own — regardless of past associations to a certain British secret agent. The movie is a bit more electric when Connery is on-screen and the film and Connery invest so much into the character that when his death comes, it’s easy to feel the same anguish that Costner’s Ness does.

I remember seeing The Untouchables when it aired on TV after Connery had won the Oscar. I have stronger memories of the Mad Magazine parody of the film than I do of the movie itself — beyond the death of Malone sequence. Having only seen it edited for TV, I was surprised by the amount of violence and blood in the film. Of course, there has to be a certain amount because this is a mob movie. The action is well-directed by Brian DePalma and I found a POV sequence when a mob assassin breaks into Malone’s apartment to be particularly fascinating. DePalma goes to the POV well a couple of times in the film, but none is quite as striking.

I’ve heard that at this point in his career, Connery was accepting just about any role that came his way in an attempt to get work and to somehow come out of the shadow cast on him by Bond. Some of those roles turned out great for him (this one, Hunt for Red October) while others may have left you scratching your head a bit (The Russia House). A good friend used to joke with me that Michael Caine would show up to be in your junior high school production of Grease as long as you provided craft services. Certainly, that same joke could be applied to Connery at times. END_OF_DOCUMENT_TOKEN_TO_BE_REPLACED

Audiobook Review: Doctor Who and the Genesis of the Daleks by Terrance Dicks

Thanks to a myriad of media releases and repeats, “Genesis of the Daleks” is a story that’s never been very far from the zeitgeist of Doctor Who fans. Regarded as one of the finest installments in the series long run (classic or new), it’s one that many fans (including this one) can recite key moments from (especially those on the abridged LP released in the ’70s and re-released on every possible format since).

Knowing the key dialogue from these moments only makes the differences between what we saw on-screen and what Terrance Dicks adapts to the page stand out a bit more. It’s clear that Dicks is working from an earlier draft of the script since the cliffhangers are moved about and fall in different places than we see on-screen. (The lore has it that the cliffhanger to episode five was supposed to be the famous “Do I have the right?” speech and not the Dalek battling an uncased Dalek mutant). But while minor moments are different, Dicks is still able to do justice to this undisputed classic when it comes to translating it to the printed page.

Dicks is able to condense a bit of the running back and forth between the Kaled and Thal cities (it’s a six-parter, so there’s a lot of running about) and he even makes the three corridors sets that double as both cities on-screen seem more expansive than they are on-screen. And while Dicks can’t quite capture how great Michael Wisher is in creating Davros, Dicks is still able to convey the menace and tragedy of the character here.

While this script is Terry Nation’s finest hour for Doctor Who, it isn’t necessarily Terrance Dicks’ finest hour in the Target line. But you can still tell that Dicks has put some care and time into crafting this story for the printed page. It’s certainly miles better than many of the adaptations to come during the fourth Doctor’s tenure.

The audiobook of this one is quite good. Jon Culshaw does his usual great work at imitating Tom Baker. Wisely, Culshaw doesn’t try to sound exactly like the screen versions of each character and his performance here continues to cement him as one of the better readers in this range. And, of course, Nick Briggs is on-hand to give us authentic Dalek voices.

All-in-all, this is another solid audiobook in this range and I find myself beginning to become nostalgic as the end of the range looms nearer.

Doctor Who: The Brain of Morbius

When the BBC began releasing Doctor Who on video in the mid-8o’s, they made the (mistaken) assumption that fans wouldn’t mind a few revisions in the stories. And so it was that the first releases in the range were omnibus versions of the stories, removing the cliffhangers and only featuring the opening and closing credits once per story. The BBC eventually figured out that what fans wanted was each serial as complete as possible, including sitting through the opening and closing credits for each episode of the story.

Possibly the worst victim of the early range of VHS releases when it came to editing was “The Brain of Morbius.” Not only was it released in the omnibus format but the initial release had thirty minutes of the story excised.

I’ll admit that I never purchased the original release of the story on VHS because of these edits. But I can’t help but wonder what the edited version of this story might have looked like. With the BluRay releases of the seventh Doctor’s era including expanded versions that were released on VHS as an extra for the story they’re associated with, I can’t help but wonder if the eventual release of season thirteen won’t include the edited version of “The Brain of Morbius” so I can finally see it. END_OF_DOCUMENT_TOKEN_TO_BE_REPLACED

Tagged as classic Doctor who, Doctor Who, tom baker