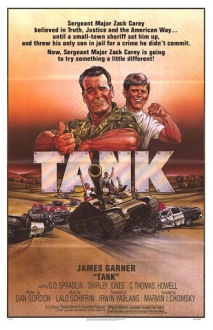 I’m not sure how Tank got on my radar years ago — was it the preview on the front of multiple VHS tapes our family rented, the box at the video store, or someone else?  All I know is the selling point of a guy who owns his own Sherman tank busting his kid our jail sounded like a can’t miss prospect.

My parents eventually allowed me to see the movie — or at least some of it.  I’m fairly certain, though I can’t be sure, that family viewing night probably ended the one time James Garner’s Zach Carey dropped an f-bomb about the apple cobbler served in the base mess hall.

Let’s get one thing out of the way first — the level of swearing in this movie is pretty high.  In addition to the f-bomb detailed above, the movie also has both Garner and co-star Shirley Jones using the word “a*****e” (I can only imagine how their use of colorful metaphors clashed with the persona each actor had crafted during their tenures on television shows).

Tank is also advertised as a comedy, even though it’s not necessarily as hilarious as the trailer or the soundtrack would want you to believe.

Garner stars as Army Sargeant Major Zach Carey, a soldier who does things by the book and is looking forward to retiring in two years and setting sail on a boat he wants to purchase.  He owns a restored Sherman tank that he moves from assignment to assignment with the family. END_OF_DOCUMENT_TOKEN_TO_BE_REPLACED