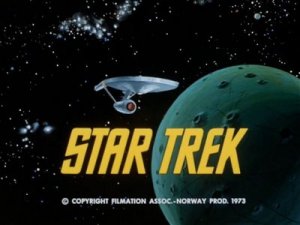 These days there’s a lot of Star Trek out there.   At last count, there were over 700 episodes from the various series plus a dozen movies.*

*If you add in the fan-made productions, it only increases the number.

I guess you could say that if you’re a Star Trek fan, you have a lot to choose from.   Given the size of the buffet, it’s easy to get caught up in only going back for your favorite course again and again — in my case, this would be the original (and still the best) Star Trek.   Even within the original three year run, there are  certain runs that I’m more familiar with or re-visit more often than others.**  And as with an smorguboard, there are going to be some areas that you neglect, don’t visit or maybe overlook.

**To combat this, I did a re-watch of the third season a few years ago and found I enjoyed it.

One of those blind spots in my Star Trek fandom is the Animated Series.   I’ve seen a sampling of episodes in repeats and from picking up the commercial VHS releases on clearance back in the day.  And like the completist that I am, I’ve purchased the DVD set and have it sitting on my shelf with the rest of episodic Trek.   When it first came out, I had every intention of watching the entire run, though that quickly got sidetracked.

I’ve read a smattering of the Alan Dean Foster adaptations of the episodes and found them a bit more satisfying than than the actual episodes themselves.

And so, I’ve had this gap in my Trek fandom for a while now.

Enter the Mission Log Podcast, which for the past year and a half has been turning a critical eye to every episode of the original series and determining the morals, messages and meanings as well as looking at whether or not the episodes stand the test of time.    With the original series in the books, the podcast has turned to looking at the animated series and it’s given me a good excuse to sit down and finally take in the animated series.

So far, we’re two Mission Logs into the lookback at animated Trek and four episodes into the animated run.

And, of course, I’ve got a few thoughts on things.