#VintageSciFiMonth: “Breeds There A Man,” “C-Chute” & “What If –” by Issac Asimov 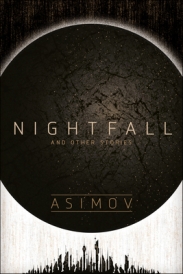 As #VintageSciFiMonth continues, I’ve read/listened to a few more of Issac Asimov’s short stories from his Nightfall and Other Stories collection.

“Breeds There a Man?” shows a different side of Issac Asimov and it’s one I found fascinating.

Elwood Ralson is a brilliant physicist who can apparently look at a problem and come up with a solution. As humanity lives under the threat of nuclear war, Ralson may be the only hope for one side to create a defense against nuclear attack. The only issue is that Ralson is suicidal and psychologically unstable.

Ralson operates under the theory that humanity is little more than an experiment in a test tube for higher intelligence and that anytime humankind gets to a certain level, the experiment is wiped out and everything starts over again.

The concept is a compelling, fascinating one and Asimov explores it well in the course of this story. It’s interesting to note how early on, Asimov shows an inclination to exploring why there are highs and lows in the history of humanity and how his characters attempt to combat them.

Asimov’s work is typically filled with robots rather than aliens. So a short story that presents an alien race is intriguing for him.

“C-Chute” is a bit of space opera with loftier ideals and well-drawn characters. In the near future, humanity is at war with an alien race. Our freighter is caught in the middle and its various passengers and crew are taken as prisoners of war. The group goes from being at each other’s throats to trying to find a way to escape and rescue themselves before being held on the aliens’ home world.

A compelling, taut story that was adapted for X-Minus One. I will definitely be listening to it at some point. This is one of my favorite stories from this collection to this point.

In the preface, Asimov notes that this is a story where he disagrees with his main characters’ viewpoint. And I suppose, that could be interesting if the story were a bit stronger.

Two friends come into repeated conflict over whether or not Earth should become part of a central, unified government (think the Federation in Star Trek). The story unfolds on three days when one of them was arrested for his beliefs and explores why the two are on opposite sides.

It’s good, but I can’t help but think this one should have been stronger. The idea of one man being right at the wrong time is intriguing. I did have a hard time not seeing this as a potential stepping stone for Gene Roddenberry in creating Starfleet, though it feels more like the Starfleet of TNG and beyond than it does TOS.