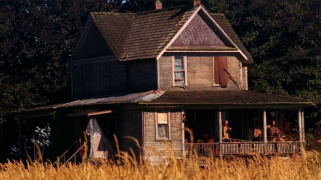 Scully: The angle of movement and deeper indentation on the right side of the mark suggest a left-handed individual. I’ve collected soil specimens and although numerous shoe impressions remain from the sandlot game, I think a couple of stone casts would prove invaluable to the investigation. Meanwhile, I’ve quit the FBI and have become a spokesperson for the ab-roller.
Mulder: Smell that. It’s perfume. God this brings back a lot of memories of my sister… All-day pickup games out on the vineyard. Ride your bikes down to the beach, eat bologna sandwiches. Only place you had to be on time was home for dinner. Never had to lock your doors. No modems, no faxes, no cell phones.
Scully: Mulder, if you had to do without a cell phone for two minutes, you’d lapse into catatonic schizophrenia.

“Home” is one of the more infamous hours not only of The X-Files, but all of television. I was fortunate enough to record it and archive it to my collection of off-air VHS tapes when it first aired. This would turn out to be a good thing since the episode was then “banned” by Fox from airing for three years (though it would be included as part of the first wave of VHS tapes for season four). I recall the scrambling done on fan forums to obtain a copy of this episode when Fox refused to air it again.

Honestly, I’m a bit surprised that Fox allowed it to air at all the first time. It’s the only episode from the initial run that got a TV-MA rating and, even for The X-Files, it goes to some pretty dark places.

After working on Space Above and Beyond for a year, James Morgan and Glenn Morgan are back in the writing fold. And it feels like “Home” is an episode designed to throw all the horror elements they missed including during that time into one episode. It may be one of the most disturbing and memorial episodes in the entire run — and that’s even after it was toned done a bit for TV. (I can only imagine how horrifying the opening sequence was before the baby’s cries are muted a bit).

“Home” regularly makes lists of the top ten best episodes of the show. Watching it again this time around, I’m not necessarily sure I agree. As a Monster of the Week, it’s a solid, creepy, disturbing installment that plays like an hour-long horror movie. But I’m still not sure I’d recommend it to you if you wanted to see an episode or two that epitomized why I love The X-Files so much. As with “City of Death” or “Blink” in the Doctor Who canon, it’s an episode that is great but there isn’t much else in the canon like it.

Mulder and Scully come to a small town in Pennsylvania to investigate the death of a baby that was buried alive. Said baby has some awful genetic mutations due to (we find out) a lot of inbreeding among a family known as the Peacocks. While this is a horror story and we do have a large amount of violence and gore in this one (the booby traps on the Peacock house are horrific), I’d argue “Home” takes a page from Psycho. Hitchcock knew how to subvert audience expectations in how much he showed and by using creative and tight editing. A lot of that is the case here with no lingering shots on the baby nor on the violence that the Peacocks inflict upon multiple town residents.

We do see some long shots of the mother under the bed, but even then she’s still couched in shadows. As it was good at doing, The X-Files allows our imagination to fill in the blanks — and mine does a great job.

The episode is one of the series’ more subversive. Having the sheriff named Andy Taylor with a deputy named Barney is a hoot. And there are some genuinely funny moments to break up the seemingly unrelenting tension of the episode (at least early on). Seeing Sherrif Taylor and his wife in their home, being a relatively normal couple is juxtaposed with the violence that the Peacocks will soon inflict upon them. Then you transpose that with the cover of “Wonderful, Wonderful” and you’ve got some truly memorable and scary moments.

There’s also some interesting foreshadowing of things to come. Scully expresses interest in being a mother, though looking ahead to later in this season, we find out there are some big hurdles to this happening. It makes the conversations between Mulder and Scully about popping out babies and genetic suitability take on a few different shades — as is the knowledge that these two will eventually have a baby together.

I think this episode’s reputation is a well-deserved one. But it’s still not one I’d put in my all-time top ten episodes. I do feel like when the Barenaked Ladies talk about watching the show “with no lights on” they’re talking about episodes like this one.