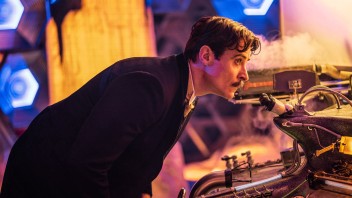 There have always been battles when it comes to wide scale acceptance of new formats or advanced in technology.  And sometimes it rarely has to do with the quality of a thing so much as the marketing side.  (See VHS vs Beta debates).

For the latest historical story, Doctor Who takes us back to the battle over which type of current would win the war and the two men pushing for their side of things with Nikola Tesla and Thomas Edison.  And attempting to convince me once again that Chris Chibnall is using his era as showrunner to pay homage to the 80’s, we get a historical that would feel right at home during that decade.

Turns out there is an alien invader that is attempting to hijack Tesla’s inventions and wants the inventor for their own nefarious scheme.  What exactly that scheme is, I’m not exactly sure, beyond using Tesla to repair things on their ships.  (If you watch Star Trek: The Next Generation, it’s hard to not see these scorpion-like aliens as just a more deadly version of the Pakleds) But need Tesla they do and the Doctor isn’t having it.

As much as I hated last week’s episode, I will admit it took me a few minutes to stop looking for some type of heavy-handed moral message in this one and to really start enjoying what was happened on-screen.  And while this one wasn’t exactly burning its way up favorites list, it still worked fairly well enough.  Most of it worked well and the guest performance by Goran Vinsjic’s Tesla was well done, though it took me a few seconds to recognize him (I watched ER back in the day).

And while there was an undercurrent of greed is bad to the whole thing with Edison, it never felt quite as much like the two-by-four to head that last week was.

Part of that comes dotoned things back a notch this week as the Doctor.  I still find myself rubbed the wrong way by what I see as an over-reliance on the sonic screwdriver, but I guess that’s just gown to the on-screen chemistry between Jodie Whittacker and Visnjic.  The give and take between the two scientists was nicely done and it felt like Whittaker had ing to be part of this era.

I will admit that part of my old-school, Doctor Who purist reared its head this week…and no it has nothing to do with the quality of the script.  I can accept that watching Doctor Who on commercial television in America means we get abrupt act breaks.  But I do find myself getting annoyed that one part of what I feel is the essential joys of watching Doctor Who is being ruined by the how BBC America presents the show — the fast-forwarding of the end titles and compressing them so we can’t see them.  We also never get to hear the theme song played.  I find myself yearning for my KTEH days when they’d talk over the credits and I’d get annoyed at that..but at least I got to sort of hear the theme.

I know it’s part of how TV works today…but it’s still sad.  I’d even  take recording the episode at a later time if  BBC America would give us the trailer and credits the way they’re meant to be seen .  And I know I will eventually get to see them they way they should be seen when I buy the Blu-Rays….

Tagged as Doctor Who, Doctor Who review, review, tv review

One response to “Doctor Who: Nikola Tesla’s Night of Terror”