TV Round-Up: The X-Files: This 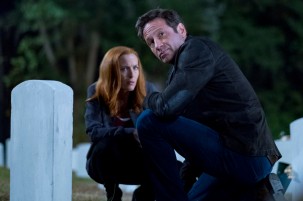 Who needs Google when you’ve got Scully?

One of the bigger missteps of the tenth season of The X-Files was continuing to follow the same pattern the series did for nine years.  Have a big mythology episode and then follow it up without any follow-up for weeks or months on end.

And while “This” isn’t what I’d call a huge step forward in the mythology nuggets we got last week, it still felt like it was trying to build on some of the blocks put into place last week as well as paying off some of the history of the series (assuming we can remember it all, of course!)

For the long-term storylines, “This” finds a pretty ingenious way to resurrect a member of the Lone Gunman without necessarily invalidating their deaths or doing what Chris Carter did last week.  Langley has had his consciousness digitized and put into a huge super storage hub.  Also in there are such personalities as Steve Jobs.  And while the rest of his digitized buddies haven’t figured out they’re in the Matrix (for lack of a better term), Langley has and is reaching out to Mulder to end it because they’re allowed to be creative without necessarily being allowed to dream, grow.

The fast pace of the episode doesn’t really allow much time for Mulder, Scully or Langley to stop and ponder the central question of what does it mean to be conscious, human or to have a soul (as many episodes of Star Trek do when examining created lifeforms such as androids or holograms).  Instead, it’s more about the action and shutting down the servers because the inhabitants are unwilling and unwitting servants of an overall larger agenda.  I feel like that this was a concept that could or should have got a bit more consideration as well as the question as to whether or not the other personalities inside like Jobs would want this thing shut down.

And, of course, these geniuses are all working on the problem that Mr. Y and his cronies told Mulder was the end game last week — colonizing space for an elite, select few.  Or so it would seem.  I’m still not convinced that this has become the Syndicate’s entire goal for the project or the end game.  I can’t help but wonder if there are multiple parts of the Syndicate playing off each other and trying to find the “best way” to use the information gained over the past 50 years of collaboration/exploitation of the aliens.  Or maybe one of the solutions proposed by the geniuses is the CSM’s plan to eradicate most of us with a virus because they’ve lost the ability to be human and see the world as anything more or less than equations.

Again, I find myself wishing the show had spent a little time examining the implications of what we’ve found out rather than just being all action, all the time.  Don’t get me wrong — gun battles and car chases are fun. But I feel like when the series was at its best, there was more going on than just that.

Along the way, we find out that there are now multiple agencies with ties all over the world now more determined than ever to eliminate Mulder and Scully’s work and the truth hidden in the X-Files.  And that the X-Files are now digitized, with some gaps in there.  I find myself a bit confused at exactly where the physical files are stored.  I get the impression Mulder has taken a few home with him.  And yet, I assume that the files themselves are mostly in a vault somewhere at the FBI or some other storage facility.  Looking at the big picture and seeing that certain things are scrubbed out, I can’t help but wonder if CSM and company scrubbed out the truth and/or information on where to find William from the digital copies. Or does Skinner’s security clearance not go high enough to unlock that information and will we see Mulder spend a chunk of the season looking for a password?

Because, you know, those hours of the day spent chasing a flash drive or something like that to unlock data were the BEST parts of 24.  (That last part was sarcastic, in case you missed it).

And yet for all the questions raised, I will still take an episode like “This” over what we got last week.  With swirling conspiracies, questions of who is whose side and the give and take between Mulder and Scully, this felt more like the series in its prime (or maybe just outside it) than last week did. The idea of expanding the conspiracy to find various agencies all having a vested interest in shutting down Mulder and Scully is intriguing and I hope it pays off.