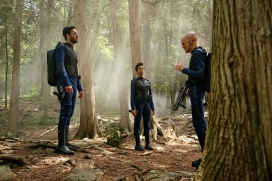 After taking a week off for some wacky time-travel fun, Star Trek: Discovery gets back to the business of the war with “Si Vis Pacem, Para Bellum.”

CBS Digital originally intended for this episode to serve as the mid-season finale.  And while it does end of a cliffhanger, I’m glad they’ve decided not to just leave us hanging on these developments for the next couple of months.  Don’t get me wrong — it’s strong, solid episode but I think I would have been annoyed if this was where we left things until January.

The episode also made me sad that I’ve read certain fan speculation online about the identities and fate of certain characters. I found myself reading a bit too much into certain lines, looking for hints of foreshadowing that may or may not necessarily be there. The biggest is when Saru is able to read Tyler’s thoughts thanks to the spore-beings and comments that Tyler is being deceptive. On the one hand, that’s exactly what Tyler is doing in an attempt to  buy Burnham time to set up a communications relay using the giant tower on the planet, but based on certain articles I’ve seen online that put various clues together, I couldn’t help but wonder if Saru found out that Tyler is hiding something more from our crew. And if that will come back to bite Burnham when and if it’s finally revealed.

It’s interesting to see that as Burnham is becoming more willing to open herself up to people on Discovery (Tilly and Tyler), that some of the other members of the crew are hiding secrets from each other. Tilly and Stamets are both aware of the impact using the spore drive is having on him, allowing him to exist outside of time (or could he possibly be going back and forth from our universe to a certain parallel universe in which facial hair signifies that you’re evil?) and are actively keeping it a secret from everyone else, especially Culber.  As Stamets points out, telling Culber puts the doctor in an awkward position.  He either reports the impact that the spore drive is having on Stamets, which will turn him into an instant lab study and could lead to Starfleet losing the war or he keeps it to himself and faces charges when and if Starfleet eventually wins the war.  It’s the Kobyashi Maru of situations — and that doesn’t even take into account the impact it can and will have on their personal relationships. 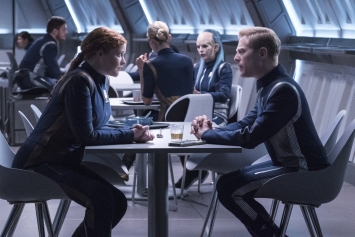 Stamets does have an interesting line of referring to Tilly as “Captain” which I feel can be taken one of two ways. One is that he’s seeing outside of time and that Tilly will, eventually, rise to the role of captain. Or the other is that he’s shuffling back and forth between our universe and a certain other one where that could be Tilly’s rank.  Again, the entire moment with his reflection lingering in the mirror a few weeks ago looms VERY large.  (And there’s so much online speculation and actors and directors giving away details that haven’t come up just yet that I can’t exactly ignore it.  Well, I could but I’m weak…weak I tell you!)

All of this underlines that the war with the Klingons isn’t going well. Their technology allows for their ships to avoid being locked onto while in battle, giving them an advantage.  Lorca and company are trying to come up with a way to level the playing field a bit, which is why Tyler, Saru and Burnham are on an away mission to planet Phavo.  Seems there’s a big crystal structure that can help Starfleet lock onto the Klingon vessels.

The episode opens with a space battle that may be one of the most entertaining space battles Star Trek has given us in any iteration.   The battle, for once, operates in three dimensions (as did the battle in the Nebula in Wrath of Khan), which I loved.  It also highlighted how bad things are going for Starfleet. Discovery can’t be everywhere at once and with their new technological advantage being spread throughout the Empire, the Klingons appear to be turning the tide in their favor. 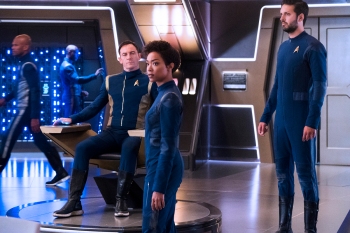 I get the feeling that the Klingons have been able to withstand the first punch that Starfleet gave them with Discovery and are turning the tide in their favor. It will be interesting to see if and how Starfleet can counteract the inability to lock weapons on Klingon ships because clearly by the era of Kirk and Spock they can do just that.

Meanwhile, we get our first significant away mission of the series with the trio of Saru, Tyler and Burnham trying to find a way to counteract this new cloaking device.

And that leads up to Phavo and some nice character work for Saru and Burnham.  I will admit part of me thought it would be interesting to see only Saru and Burnham on the away team, given the tension between them.  But having Tyler along gives us another dynamic and a buffer.

Early on, it was established that Saru’s people live in a perpetual state of fear and can sense death. Saru’s hearing means he can hear the song that the cloud of creatures or the planet is creating constantly playing.  (I can only imagine it would be like riding It’s A Small World at DisneyWorld — fun at first but it would get really old really fast!)  Saru becomes weary of this, trying to rest and asks the creatures for one moment of silence — which they deliver and then some. Suddenly, we see a different side of Saru — one that is freed from the noise and his race’s constant fear. Freed from that, he doesn’t want to go back, crushing everyone’s communicators, lying and willing to do whatever it takes to allow him to stay.  I do wonder if Saru’s comments that Tyler and Burnham would eventually come into the fold were true or if he’d eventually have to eliminate one or both of them.

Building on what Saru told Burnham a few weeks ago, the wounds that he feels from her become a bit deeper. Saru points out that he won’t let Burnham take anything else away from him.  This is twice we’ve heard about this now and if we don’t get some more payoff on it later, I will be disappointed. 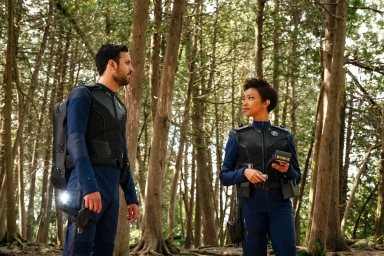 Meanwhile, we find out not only do Saru and Staments have a lot at stake, but Burham does as well.  Unlike Tyler who can retire to his beach condo when the war is over, Burnham looks forward to a return prison.  She sees herself as only useful until the end of the war, at which point Lorca’s leverage with Starfleet runs out and she’s sent back to prison.  It certainly makes me unsure of what to root for in seeing Lorca stay in command as long as possible (you have to think that if Cornwell removes Lorca from the center chair that Burnham would be pulled from duty as well).  It also helps explain why Burnham is reluctant to form too many bonds with her crewmates outside of Tilly and Tyler.

OK, so maybe I was wrong about this one being a bit more straightforward. There is a lot going on here and that doesn’t take into account the Klingon plotline.

Speaking of not knowing how to trust, I’m not sure how much of what L’Rell says and does we can take at face value. Does she want to help Kov? Is she looking to defect?  Did she really kill Cornwell?

Given that we see some of her fellow devotees of T’Kuvma rounded up and pretty graphically killed, the lack of dismemberment of Cornwell makes me believe she’s not actually dead.  Could this be part of some plan that Cornwell and L’Rell have concocted to allow her to defect and possibly give Starfleet a look at the cloaking technology?

This episode ran shorter than most, leading me to wonder if they couldn’t have spared a few seconds to declare Cornwell officially dead if that was the case.

Again, it could be that certain online speculation is clouding my perceptions here. But if that’s all to the Cornwell plot I may be disappointed.

That leaves us with only one more episode left in the fall run.  Here’s hoping the show goes out on a high note….