While “Old Wounds” introduced us to the universe of The Orville and its characters, the episode really didn’t tell us much about the characters beyond a basic character tic or bio line.

And while “Command Performance” still suffers from many of the issues that played the pilot episode in terms of establishing a tone for the series, it at least tried to give us a bit more insight into a few of the characters.

Answering a distress call, Mercer is stunned to find his parents on-board and headed for a weekend retreat on an alien world.  Following an embarrassing conversation on the viewscreen involving colon health, Mercer decides it would be best to meet with her parents in person.  Grayson tags along at the invitation of Mercer’s parents (which seems a bit odd since the two are divorced and Mercer reveals that his mother once called Grayson a bitch 46 times in one conversation), leaving Alara in command of the ship (Bortus is off nesting, literally).   Arriving on the ship, Mercer and Grayson are beamed away and the Orville suffers damage as Alara makes a series of bold moves that don’t quite go the way she hoped or expected.

The idea of putting Alara into a command role and watching her grow up on the job had some potential, but a lot of it gets lost.  Alara doesn’t necessarily discover a command style as much as she runs around the ship looking for advice and taking shots of tequila, right before she faces or makes huge decisions.  It’s interesting to see where she turns for advice and how she acts on it. But some of her decisions seem less motivated by doing the right thing or knowing when to break the rules as much as a need to be liked or going along with the last thing someone told her.  At one point, Alara is ordered to leave Mercer and Grayson as casualties (despite having good intel on where they were beamed to) and return to Earth.  Her initial decision to follow orders and toe the line doesn’t win her any friends among the crew.  Well, that is, until she decides to defy orders and to follow a shaky plan that will depend on everything going right to rescue Mercer and Grayson. 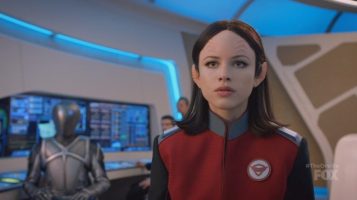 The biggest issue from Alara’s storyline comes from the crew’s reaction to her decisions.  It’s easy to see Malloy being upset with Alara’s decision because the show has established a friendship with Mercer that was in place before the events of “Old Wounds.” But the rest of the crew standing up and cheering for her in the mess hall doesn’t make as much sense for the simple reason that the crew has only been together for a short amount of time and I can’t see how Mercer or Grayson have endeared themselves to the crew this much.   Does the crew just miss their Bickersons routine on the bridge or are they just happy they don’t have to get used to a new commander?  I get what Seth MacFarlane is going for with the scene, but I don’t feel like it’s one that works particularly well at this point in the series run.

Meanwhile, Mercer and Grayson are in an exact replica of their New York apartment from when they were married. Turns out that they’re part of an intergalactic zoo, held by an alien race that kidnaps and puts exhibits on display for their amusement.  And it’s one that has a high opinion of itself by refusing to talk to lifeforms deemed unworthy.

Again, there are some potentially good moments and ideas in here.  Seeing Mercer and Grayson discuss what might have been if he hadn’t been so driven and she hadn’t felt lonely by the long hours he was putting in works better than seeing the two bicker and snipe at each other. (Also makes them feel a bit more like professionals).  But these early moments are quickly undermined by the two resorting to being the Bickersons after a few days trapped in the cage together and old arguments coming to the fore.  I can’t quite figure out what the show wants us to root for these two – should they be together or shouldn’t they?

The idea of an alien zoo with specimens held without their consent also has potential, but it never gets really explored.  We see a depressed alien who has been held there for thirty plus years and a cute, child alien who misses his parents. Guess which one gets saved when the crew shows up to get Mercer and Grayson out?  Yep, it’s the cute kid.   And while Alara and Isaac are able to barter for the return of Mercer and Grayson by giving the aliens 10,000 hours of bad reality TV, we don’t know if that goodwill extended to others held against their will.   I also can’t help but wonder if the alien kid will become a recurring thread or simply forgotten by the time we get to the next episode.

Honestly, it feels like MacFarlane wanted to set up the punch-line of giving these aliens the reality TV and didn’t really think through much beyond how to get there, tell the joke and then keep on going.

Again, it all comes down to the show not really finding a tone.   The teaser involves Mercer making a lot of bad jokes about Bortus’ species means of reproduction, none of which really land.  We also have LaMarr referring to Alara as “Dora the Explorer” while she’s in command.  One review I read last week said that it appears The Orville is showing us the adventures of a crew that isn’t on the flagship of their fleet, unlike what we’ve seen in most of Star Trek.  Perhaps that contributes to the banter and casual insults tossed around by various characters. But you’d still think the ship would have some respect for the chain of command.  Again, we see multiple characters have open contempt for Alara when she makes unpopular choices.  She does bust Malloy off the bridge when he questions her too much, but the rest of the crew isn’t exactly treating her with any more respect.

At this point, I’m interested to see what the show will offer when someone besides MacFarlane writes an episode.  I realize that his fingerprints will be on it, of course.

Those episodes may tell me a lot more about whether or not it’s worth sticking with the show long-term or even help the show find a consistent tone and voice.

One response to “TV Round-Up: The Orville: Command Performance”