Audiobook Review: Doctor Who and the Horror of Fang Rock by Terrance Dicks 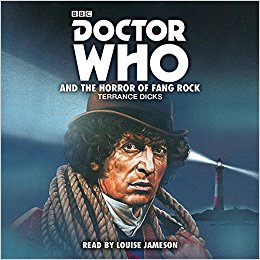 For some odd reason, I never picked up a copy of “The Horror of Fang Rock” during my Target novel collecting days. Whether it’s because the bookstores I frequented didn’t have a copy or there were other books that got my hard-earned cash instead, I don’t know.

So, I came to the audio version of the fourth Doctor and Leela adventures without any memories of the original on the printed page.

And I’ve got to admit, this one was pretty well done. Adapting his own script, Terrance Dicks creates a bit more backstory for some of his characters and gives the reader some context as to the social norms and assumptions of the day. These additions give a greater depth to how some of the characters interact over the course of the novel.

And while his adaptation of “Horror of Fang Rock,” doesn’t necessarily create a larger canvas for the story like “Day of the Daleks” or “The Auton Invasion,” “Fang Rock” still feels a bit more substantial than others from this era that simply feel like Dicks is adapting the shooting script for the printed page.

The audio version of the story adds an extra layer of tension to the already tense story, thanks in large part to the performance of Louise Jameson. While the actress who brought Leela to life has been a fixture in the Big Finish range, this is her first Target novel reading. Based on the work she’s done here, I hope it won’t be her last. Jameson reads the story like we’re gathered around a camp fire and she’s sharing a scary tale with us. Jameson wisely doesn’t try to offer her imitation of each actor from the original broadcast but instead creates her own performances for each of her characters. It goes without saying that her Leela is a highlight of this novel.