Doctor Who: The Power of the Daleks, Episode 1 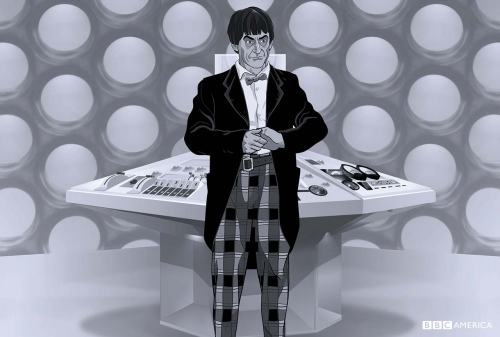 During my teenage years, I picked up a photonovel copy of “The Power of the Daleks” at a sci-fi convention.   The original script for the long-lost story was put together with the telesnaps (photos of the actual episodes) in an attempt to give fans a chance to see what the watching the serial back in 1966 might have been like.  At the time, I figured this would be a close as I’d get to fully experiencing “The Power of the Daleks.”

When I first got on-line, I discovered the Doctor Who fan community and the practice of sharing the off-air audio from lost serials with each other.  Thank to the generosity of a fellow fan, I was able to acquire the audio from several lost serials that I eagerly listened to, imaging what it might have been like to see the story back during its original airing.  At the time, I figured this would be as close as I’d get to fully experiencing “The Power of the Daleks.”

Then came the reconstructions, marrying the audio with existing clips and the telesnaps.  Again, I thought this was as good as it would get.  Then came the John Peel novelization of the story.  And I thought that with the novel, the reconstruction and my photonovel, that would be as close as we’d ever get to seeing the story unless it miraculously returned to the BBC vaults.

It was during this time that computer generated animation began its rise and I wondered if there might be a way to recreate the lost Doctor Who serials using CGI.  After all, we had the telesnaps as visual reference and the original audio. I figured that we’d get to a point in twenty years where the cost of CGI would be low enough that the BBC might consider it — if not for all the lost serials at least a few of them.

Close to twenty years later, my prediction has come true. Well, sort of.

To celebrate the fiftieth anniversary of its original airing, the BBC commissioned a newly animated version of “The Power of the Daleks.”  Episode one went live on the BBC web site on the fiftieth anniversary of its first airing a few weeks ago with each of the other five episodes rolling out soon after.  The serial finally made its jump across the pond Saturday evening with BBC America airing the first installment.

And once again, I can’t help but wonder if this is a close as we’ll get to experiencing the serial.

If this is as good as it gets, then I have to admit that I’m very pleased.  Ask most classic Doctor Who fans which lost serial we’d most like to see back in the archives and I’d imagine this one would be in the top five.  Seeing the first full story after the first ever regeneration (not even referred to by that term in the story) would be a delight for any classic Who fan.

The production team understood that they were asking audiences to take a huge leap of faith on this story.  So, to help fans know that it was still Doctor Who, the Daleks are included.

Watching the first installment, I can’t help but wonder what fans of the modern Who might think of this.  For one thing, the pacing is very different from the modern series.  The first ten or so minutes unfold entirely in the TARDIS as the companions (and audience) come to grips with what’s just happened and try to figure out if this new guy is really the same Doctor they’d  come to know and love.

The serial also follows the pattern for most classic Who Dalek stories where they are name-checked in the title but don’t show up until the end of episode one.  What lies in between is a lot of waiting and setting up the big reveal. But given what “Power” has to do to establish Patrick Troughton as the second Doctor, it may be for the best that the Daleks aren’t also on display in the first episode (though I can imagine audiences unfamiliar with this who have watched BBC America’s ad campaign might get frustrated at the lack of immediate Daleks).

This fan, however, loved it.  I could quibble about how the animation has been produced for today’s HD sets and is wide-screen when the original was 4×3.  Or that BBC America cut off the ending theme/credits. But I won’t.  Instead, I intend to spend the next five weeks sitting back and enjoying this as it airs and then hope that I get the DVD version for my birthday.  (It comes out a week after the big day in January!)  Added bonus — I get to share a classic Who serial I’ve never seen with Shortcake.  She may not remember watching it with me someday, but I will….

I also watched a bit of the color version of the story.  And while I prefer the original black and white, I’ll admit I watched the same story in color yet again on my tablet.

I can only hope this will be a success and encourage the BBC to give this treatment to other lost installments.  Maybe they can start with “Evil of the Daleks.”

Tagged as Doctor Who, Patrick Troughton, Power of the Daleks, tv