This week’s Top Ten Tuesday (hosted by the Broke and the Bookish) asks us which books we’d like to see adapted for the screen. 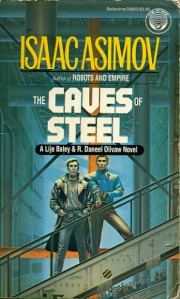 1.  The Robot novels by Issac Asimov.  Yes, I know we had I,Robot a few years ago, but I’d like to see an adaptation that is more faithful to the source material than I,Robot ended up being.  I’d love to see the R. Daneel Olivaw and Lije Bailey novels adapted for the screen — though I’m not sure if they’d work best as a movie or a limited run series so we could fully explore the world that Asimov created on the page.

2.  The Dark Tower novels by Stephen King — If these were done right, this could be a fantastic.  I was intrigued a couple of years ago to hear of the ambitious plan to adapt this seven book series for television and movies.   It sounded similar to what Marvel is doing with its cinematic universe.

3.  Mistborn novels by Brandon Sanderson — Yes, I’ve only read half the series, but what Sanderson has crafted here would translate well the screen.  A novel with a clearly defined magical system that looks at power and the implications of gaining, having and keeping it.   The first novel deals with our heroes overthrowing the forces of evil and then the second novel examines the consequences of that.   I’m thinking this one might be better as a TV series.

4.  Tess Monaghan novels by Laura Lippman — If only to see who they might cast as Tess.

5.  The Kushiel series by Jacquelyn Carey –– Yes, it would probably have to be a pay cable series to really do it justice, but I think this could be a great fantasy series to bring to the screen.

6.  Breathe, Annie Breathe by Miranda Kenneally — With YA novels being all the rage to adapt for the silver screen right now, I think this one would fit right in and might even be better than many that we’ve seen.

7. Swim the Fly series by Don Calame –– Another young adult series and one that I think could do very well, if adapted right.  The first one about three guys vowing to see a real live naked girl before the end of the summer just seems like a great elevator pitch to a studio and could be a nice hook for the trailer.

8.  The Mystery of Grace by Charles de Lint –– This standalone novel from de Lint is accessible, enthralling and utterly heartbreaking.  I’d love to see it done right as a movie.   Alternatively, we  could see a television series based on his Newford novels.

I’m going to stop there this week.  I’m sure I will think of four more once I’m done posted this.

7 responses to “Top Ten Tuesday: Adapted for the Screen”