Way Back Wednesday: Doctor Who: Remembrance of the Daleks by Ben Aaronovich

We’re halfway to the weekend and that means it’s time for Way Back Wednesday hosted by A Well Read Woman.   The purpose of this meme is to look back on those books that made a special impact on you and that you love to read.

This week’s entry comes from the Target line of Doctor Who novelizations.   In the days before we could collect Doctor Who on VHS or DVD, there were the Target books, which adapted just about every broadcast Doctor Who story for the printed page.   A majority of these were written by one-time script-editor Terrance Dicks (and I’ll probably get to at least one or two of those adaptations in a future installment), but there were other writers in the range.   As the books caught up to the stories airing on our screens, there were times that the original script writer would adapt his or her work for the printed page, often adding in scenes that didn’t make the broadcast due to time or budgetary reason or giving deeper background to scenes or character development. 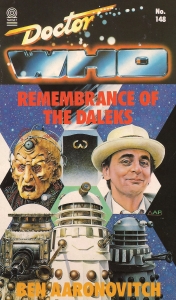 “Remembrance of the Daleks” falls into the category of a script adapted by the original writer and one that expanded on an already great story and made it even better.

Featuring the seventh (and my favorite) Doctor, Sylvester McCoy, “Remembrance of the Daleks” aired during the show’s twenty-fifth season and celebrated the anniversary of the long-running show.    The Doctor and Ace are back in 1963, just days after the original TARDIS crew began their adventures together and find themselves helping a para-military group that is caught between two warring factions of Daleks.  Both sides want the mysterious Hand of Omega, a Time Lord artifact that each side believes will give them the upper hand in their civil war and their drive to conquer the universe.

Ben Aaronovich took a memorable story from the screen and made it even better on the printed page.   Daleks going up stairs for the first time ever, the Doctor playing his dark games and hinting at his past, nods to the entire run of the series and  the popular game “Davros, Davros, where is Davros?” are just some of the reasons I love this story.  And why I was so eager to find the novelization.  It took months of searching to find it — this was in the days before Amazon, so it was luck at happening to see it on our book store shelves.  Of hearing rumors in Doctor Who Magazine of the publication date and hoping that your store would carry it close to the release date.

I recall finally seeing it on the store shelf — on a visit with my grandparents and snapping it up.  I read it all on the plane ride home and loved it.    Aaronovich had outdone himself, including sections taking place at the creation of the Hand of Omega and implying that the Doctor could be more involved that he was letting on — not only in stealing the device when he left Gallifrey, but in the creation of the device.  It even had a chapter from the point of view of the Special Weapons Dalek!   And it somehow made the cliffhanger to episode one in which a Dalek glides up a staircase for the first time ever (if you’re not a classic Doctor Who fan, watching the show back in the day, I’m not sure you really understand how HUGE that moment was) even more exciting and special, like I was experiencing it again for the first time.

This novel just hit a sweet-spot for me in my Doctor Who fandom and I have very fond memories of reading it.   It was selected to represent the seventh Doctor in a series of re-published novels when the fiftieth anniversary rolled around.  I looked at the new shiny cover and considered buying it again, even though I still have my original copy of the book.

And now, just as I’m tempted to read it again, the novel has been released as an audio book.    I’ll be purchasing it and listening to it soon and find out if it holds up to its lofty place in my memories.

Filed under Doctor who, meme, Way Back Wednesday

Tagged as Doctor Who, meme, Way Back Wednesday

3 responses to “Way Back Wednesday: Doctor Who: Remembrance of the Daleks by Ben Aaronovich”