The Flash: Revenge of the Rogues 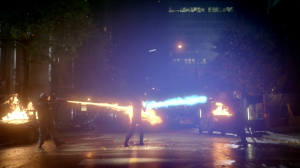 After “The Man in the Yellow Suit,” my expectations meter for The Flash was extremely high.  So much so that I fully expected whatever episode led things off after a six week hiatus to disappoint me simply because I’d had so long to look forward to it.

So, imagine my surprise when mid-way through “Revenge of the Rogues” I found myself feeling like the show hadn’t missed a beat.    Yes, this isn’t the same type of level of mythology episode that we got with “Yellow Suit,” but it’s an episode that is just as important to the mythology of the series and the DC television universe.    In order for The Flash to work, there are going to have to be some recurring bad guys and “Revenge of the Rogues” was a nice step in establishing two recurring villains for Barry and company to face off against as the show runs its course.

Now, I wasn’t a huge Prison Break fan (I think I stopped after season one) so seeing Wentworth Miller and Dominic Purcell sharing screen time again wasn’t as much a hook for me as it may have been for some.  What was the hook was watching how these two played off each other, with Miller chewing every bit of scenery that he could at Captain Cold and Purcell’s work as Heat Wave.   One of many great scenes was the torching of the priceless painting so that our two villains could go after the Flash and take him out once and for all.   It’s at that point that these two went from thorns in the Flash’s side to out and out super villains (for lack of a better term).

It’s also the point at which their villainy went up to a different level.   Kidnapping Catilin to draw the Flash out (after he refused to battle them so he could concentrate on beefing up his powers to take on the Reverse Flash) was a nice touch as was the coda where it seems that Captain Cold has something greater in mind for taking on the Flash in the future.   What that is remains to be seen as does the question of whether or not he’s got an arsenal of cold guns somewhere else stashed away or will we have to see him try and liberate his weapon from Star Labs at some point in the future.    `

I really liked how their plans dovetailed into Barry’s new focus on becoming a better Flash and how he wasn’t going to allow other crimes or villains to distract him.    The show really took advantage of it being off in real time to give us a time jump forward internally and give us a glimpse of the more myopic Barry.  I liked seeing bits of that here but I’m glad this is all we got since part of the fun of this show is how much Barry likes being the Flash.   I think the show can now enter into territory that other superhero shows have trod before of asking the question of is Barry bringing the crazies out of the woodwork because of his actions or would they have shown up anyway even if he wasn’t around.    Also, the question of how much balance Barry will need in his life should work well and I can’t help but wonder where things go now that the existence of the Flash is confirmed in Central City.

Will Barry soon find himself overwhelmed by calls for help or how much good he can or should do?   And as more super villains start to show up, could that have an impact on other things and cause some sentiment to turn against the Flash?

I’m not saying the show has to go down all these paths, but I feel like it could.

As for the rest of things, I’m glad that Dr. Wells’ agenda has been put on the back burner for an episode though I get the feeling Joe is starting to not trust him when it comes to all things Barry.   That could be my reading into things because we know more about what Dr. Wells could be up to than the characters on the show do.

But it was a solid return and one that fully met and exceeded my hopes for it.   I’ll take it

Oh and any time you can work in a Ghostbusters reference or three, you’re good in my book.

Filed under The Flash, TV review