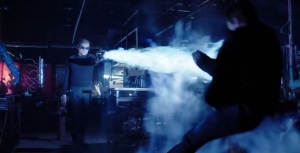 Opening with Barry testing his abilities by dashing between three games felt like a montage from those early episodes of Lois and Clark, when Clark would do accomplish ordinary tasks in extraordinary times and ways using his powers.   The scene of the three games and pushing Barry’s limits both physically and mentally worked very well in the episode and it also underscored the theme of the episode — that being the Flash is more than just about zipping around from place to place quickly.  It’s about being part of a team.

Barry will need to remember that later in the episode when it turns out the latest super villain he’s facing isn’t one of the storm’s creation but instead one created by a member of his own team.  In the early days before Cisco knew if Barry would be a force for good or evil, Cisco created a freeze ray to thwart Barry.   Now said weapon has been stolen from Star Labs and put into the hands of a criminal who, at first, wants nothing more than to steal a very large diamond.   It was interesting to see Leonard Snart start as an average, run of the mill criminal who soon gets greater aspirations when he realizes the true power he wields.

Of course, it was hard to separate out previous “freeze ray” comic book tv show plots from what was unfolding here.  I kept expecting the diamond to somehow be a component of the freeze gun or a larger freeze gun that Captain Cold decides to experiment with.   Not that it couldn’t still happen, of course.  It’s also hard not to be reminded of the superlative Batman: The Animated Series episode, “Heart of Ice” featuring Mr. Freeze — especially since it feels like the cold ray looks and feels like something from that animated project brought into the live action world of The Flash.

I do feel like some of Snart’s transformation from a small time crook to Captain Cold was a bit rushed, though.   It felt like we went too quickly from point A to point C and didn’t stop it at point B.  Of course, Wentworth Miller has a great time chewing scenery and that makes up for a lot of this.   As does the fact that he’s not put on ice at the end, but lives to fight another day and come back to threaten the Flash yet again.

But back to the theme of the episode — teams and how they function.

Last week, Joe finds out Eddie and Iris are dating and it’s initially played off for laughs.  But here it gets a bit deeper with Joe saying that he’s struggling because it’s harder to compartmentalize his home and professional lives.  This underscores some of his concerns to Barry in previous installments about being super fast but not bullet proof.   Joe has a lot of worries on his plates about the people he loves.  He also is having his assumptions challenged on a regular basis and coming to grips that what he thought and believed was the truth may not necessarily always be the case.  If he was wrong about Barry’s dad, what else could he be wrong about?

Meanwhile, Barry is struggling to trust his team — especially since it seems that Cisco has come up with two ways to undermine him in as many weeks.  This one is a bit more severe since it’s a weapon that wound Barry and kill others.   Barry’s frustration at not being able to save Captain Cold’s first victim and then his working hard to save everyone on the train later worked very well.  And seeing him learn to trust Cisco and company to have his back (even if it’s just with a vacuum cleaner) was nicely done.  Of course, this will probably all be shattered once Barry finds out that Harrison Wells has another agenda for him.  (That should be an interesting turning point when it comes.)

But this isn’t the only team that Barry is trying to be part of this week. With Felicity in town, Iris wonders why she and Barry aren’t a thing since they’re both so right for each other.   We even see the two couples (Barry, Felicity, Eddie and Iris) work together at trivia night — and it’s interesting that Barry has far more chemistry and far more in common with Felicity than he does Iris.  And given that he can zip back and forth quickly, long distance isn’t necessarily the biggest issue .   Well, at least geographically since these are both pining for someone they can’t have (for whatever reason).

I liked the crossover nature of the story — it felt like something out of a comic book with a character from one book dropping by for an issue to hang out and help out.   We didn’t need a huge info dump to understand everything and it’s nice that the episode could serve as a stand-along and not require that you be necessarily caught up on Arrow to enjoy it.  (I’m about a week behind on Arrow, but working to get back into the loop).

Another first for this one is that we don’t have any flashback sequences — and I think the story works the better for it.  The flashbacks work on Arrow, but I am not sure they lend themselves as well to this show.  We may need them occasionally, but not every week.  I’m glad to see this one finding its own storytelling niche.

And with that, we now have to wait two weeks for the next two installments.  Which seems like a long time because I’m really enjoying this show.

Looks like I’ll have that chance to catch up Arrow.   (And the other back log of shows piling up on the DVR that I mean to watch and I even meant to do round-ups for this season!)