Retro Review: Star Trek: “What Are Little Girls Made Of? 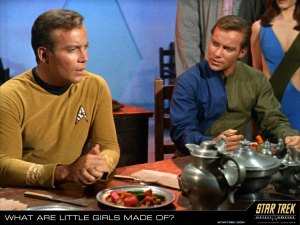 Sometimes watching classic Trek in the original broadcast order, I find myself hoping that certain threads and storylines will make a bit more sense.  For example, the back story for Nurse Chapel.

Just a couple of episodes ago, she’s throwing herself at the emotionally unavailable Mr. Spock, professing her love for him while under the influence of the strange virus from Psi 2000.   Now just a couple of episodes later, we find out that she signed on aboard the Enterprise to search for her missing fiancee, Dr. Roger Korby (who, ironically enough, we’ll also find out is emotionally unavailable, though for entirely different reasons).
However in both running order and production order “What Are Little Girls Made Of?” airs after “The Naked Time.”  It would make a bit more sense if the episodes were reversed–at least from the character standpoint of Christine Chapel.   But I guess that’s not be.
But beyond all that, there’s really a lot that’s memorable about “What Are Little Girls Made Of?” even it it doesn’t quite enter the pantheon of great classic Star Trek episodes. 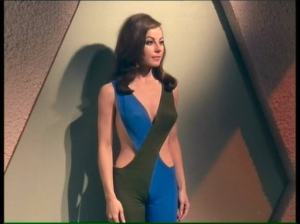 Of course, one of the memorable moments is the costume worn by one Ms. Sherry Jackson   As Shatner points out in his kiss and tell book on the making of classic Trek, costume designer Bill Theis firmly believed that less is more in terms of costumes worn by females.  And no where is that more the case than in the costume worn by Jackson as the android girl, Andrea.

I first saw this installment as a hormone imbalanced teenage boy and I have to say it made quite the impression.  If we’re being honest, it still makes quite an impression on me all these years later.  But it’s not just the costume that does it–it’s the fact that Jackson is pretty easy on the eyes.  She’s helped out a lot by the soft focus that classic Trek gave many of its female guest stars during the original series run.  But I’d still argue that Jackson belongs on the list of sexiest ladies ever to grace classic Trek.
I’m fairly certain William Shatner agrees.  Back when this episode aired on SciFi for their Trek Remastered project, there was an interview with Jackson, where it was revealed that Shatner deliberately flubbed his lines in the scene where Kirk kisses Andrea so they’d have to reshoot it–apparently multiple times.  Jackson says that if you watch the kissing scenes, you’ll see her lips are swollen from the number of times she and Shatner kissed.*
*It makes me wish that somehow these interviews could be included on the DVDs and/or Blu-Rays.  I’m betting someone other than Paramount owns them and the price would be high.  That said, I’d still love to see them again because they had some great insights and anecdotes.

Just because I can–another screen capture of Sherry Jackson as Andrea. Here she’s helping Ruk making a copy of Kirk.

“Little Girls” is also the second time in the last three or four episodes that a duplicate of Kirk is wandering the ship.  In this case, it’s an android duplicate of him and not Kirk split into two halves.   Korby does this to convince Kirk of what exactly he’s found here on Exo III.  Seems that Korby has found the remains of a civilization that wiped itself out after creating an apparent super race of androids.  Left behind is Ruk, a guardian who has forgotten his prime directive (Kirk will eventually remind him of it) who is chief enforcer and bouncer for Korby.  Korby has created android duplicates of his assistant Brown and he’s created Andrea as well.

Korby wants to take his androids to the galaxy, but not all at once. He’s afraid of what might happen should Kirk report in on what they’ve found.  So he holds Kirk and Chapel prisoner, creating a duplicate of Kirk to help them infiltrate the ship and find a suitable colony to take the android making equipment to.
Of course, Kirk is able to get one step ahead by implanting a tick into the android to warn Spock that something isn’t quite right.   Luckily the android is goaded into using it while on the ship for a brief visit.
The cloning of Kirk leads to the second memorable portion of the episode (and no, I don’t mean the image of naked Shatner spinning on the cloning device).  One chilling scene finds Kirk coming to Chapel to ask where her loyalties are and if she would betray Korby or the ship.  Chapel confesses her confusion in the situation, unburdening herself to Kirk, only to find out it’s the duplicate.  The game is given away when Chapel asks Kirk to go ahead and eat since she’s not hungry and he replies, “Androids don’t eat Miss Chapel.”  It’s chillingly effective and shows just exactly how far up the creek Kirk could be if not for his tick to warn Spock and the fact that his making with Andrea confuses her enough that she eventually shoots the android when it rebuffs her advances.
And if you guessed the big twist that Korby is actually a clone as well long before anyone else does, you’re not alone.
That said, the episode does a nice job with Korby realizing what he’s lost by transferring his consciousness to the android body and that the universe is better off not knowing about Exo III after all.  Kirk apparently agrees with the line, “Dr. Korby was never really here.”
This is another episode that show Trek making another step forward toward hitting its stride.  A lot of the episode works well and there are some minor bits that don’t. But this is among the more memorable and entertaining installments of the first ten episodes classic Trek produced.